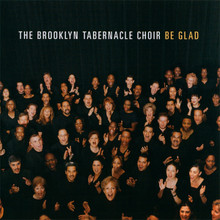 Be Glad, is a celebration of that hope in Christ, and perhaps the timing of this project could not have been more appropriate. The choir began recording Be Glad in late September of 2001, just days after the nation's tragic loss of lives in the September 11th terrorist attacks on the World Trade Center. Many choir members worked in the World Trade Center towers, and fortunately were able to escape the buildings alive, although other members of the church were lost in the tragedy.

As the album came together, Carol selected songs for the project that they could see were truly ministering to their own congregation. With the nation's focus on a national tragedy, the choir wanted to remind others of the hope in Christ. "In the midst of terrorism and all the turmoil going on, so many people are focusing on a tragedy and on patriotism, but I think our theme as Christians should be to "Be Glad," because we know that our hope is in Christ Jesus and there is so much to be glad about."

Songs Included (Previews from the Album)